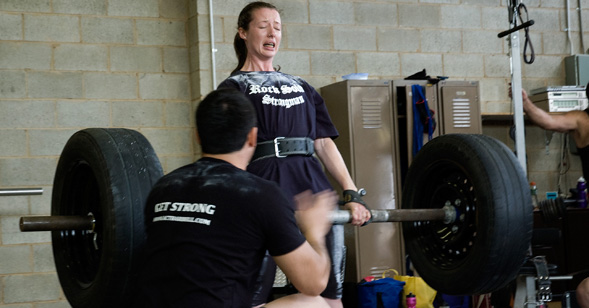 Yesterday I competed in my first ever strongman competition. I was extremely nervous about competing as I:

However, I am interested in competing in future strength/fitness competitions and I thought that this would at least give me experience in doing something in a competitive environment.

There were only two others competing in the women division, both of which had been training for the event for a couple of months (and both of which I knew), so I went into the event knowing full well that I would not be coming away with a prize. I went into it aiming just to do the best that I could (and to not break my back in the process).

There were four events that I had to compete in:

A yoke, is composed of a crossbar and two weighted uprights and is carried across the shoulders for a set distance. The yoke walk I had to do involved a 100kg yoke for a distance of 15 metres.

I knew I could complete this event as I had tried using a yoke twice before and I new that I was able to carry it for 15 metres. I managed to come in second for this event for a time of just over 13 seconds.

The log press involved pressing a 32.5kg hollowed out metal log (with handle bars), lifting it from the floor to an over head position with locked out elbows. The aim was to do as many lifts as possible in 60 seconds.

This was the event I was most comfortable with, as it involved a move I have done plenty of times (but with an olympic bar), and was focused more on strength endurance (as opposed to maximum strength). I managed 7 full reps and came in second for this event.

The axle deadlift, involved lifting from the ground, a 2″ axle which had blown up tyres on each end. This was a maximum lift event, with three attempts and a starting weight of 80kg.

I was extremely nervous about this event, as prior to last weekend, I had never done any maximum lifting, and in that session I had just managed to do a 82.5kg maximum lift using an olympic bar (a bar which is roughly half as thick as the 2″ axle).

We were allowed to use hand straps for this event (which I had never used before). I managed to lift the starting weight of 80kg, next lift I went up to 85kg, and the last lift I was given some encouragement to lift 95kg – and I got it! I finished the lift with a huge smile on my face. The other ladies (who love to deadlift) managed heavier lifts, so I came in 3rd for this event. However this was the event I felt most proud of, as I lifted much more than I expected.

The atlas stone was the last event. The aim of this event was to lift a heavy stone over a 1metre high bar for as many reps in 60 seconds. The women could choose to lift a 48kg or 54kg stone. If you lifted the heavier stone you got double the points. I new I would use the 48kg stone, as I had tried lifting the 54kg stone before and had not even been able to lift it off the ground.

Since I had never lifted an atlas stone before I was extremely nervous about this event. My aim was to get at least one full rep out. I fumbled a bit with the stone (I found it hard to get my hands in the right position to get it off the ground) but I managed to get 3 reps out – 2 more than I thought I would get, so I was pleased with my efforts. I came in 3rd for this event.

Overall I came 3rd (but with only 3 competitors this was also last place, but hey, 3rd sounds much better!). I was really happy with how I went and it gave me some much needed confidence. Peter from Rock Solid Fitness also presented me with an encouragement award (a portable dvd player) which was very sweet of him.

I’d like to say a big thanks to Pete and Joe at ACT Barbell for putting on the event in conjunction with Rock Solid Strongman Promotions and to thank them for all of their support and encouragement.

You can check out photos from the event at flickr.