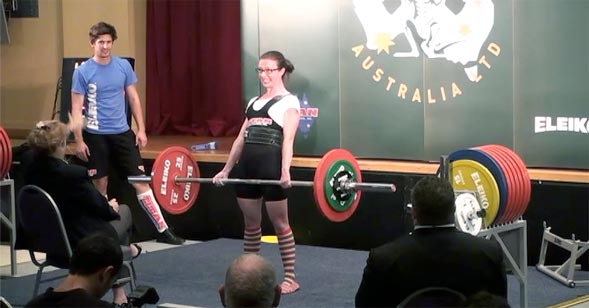 I recently competed in my first ever Australian Raw Powerlifting Championships. I’d been looking forward to this competition since competing in the final competition of 2011, the Matti Tikka Challenge. I took a few weeks off training over Christmas and started the new year with the goal of getting my deadlift back to 100kg for the Australian Championships.

It’s been a hard mental slog for me coming back from a back injury, much harder then I first thought, and getting my deadlift back up to 100kg has been a long time coming, and I wanted this to be the competition where I got it.

I had a very good preparation leading up to the Championships and was feeling focused and confident. Even on the day of the comp I was feeling good, albeit a little nervous. However, once I started warming up the nerves really kicked in. I had never been so nervous in my life! I went out for my first squat attempt of 90kg, and knew it wasn’t going to be as a good a lift as I knew I could do, as I couldn’t keep my legs from shaking! I managed to pull off the lift, but instead of going straight to a new PB of 97.5kg in the second lift, I decided to equal my PB of 95kg. I was lifting slow and shaky, so wasn’t confident I could pull off the 97.5kg. My aim for the Championships was purely to increase my total, and if I couldn’t pull out new PBs in my squat or bench press, I was going to do it in my deadlift.

I attempted the 97.5kg squat but couldn’t get it. I decided to take on the same strategy for my bench press. As I said, I was lifting slower then I usually do, due to my nerves, and I knew I didn’t have the 55kg bench press I wanted (I also lost a bit of weight leading up to the competition, which affected my bench strength). I equalled my previous PB of 52.5kg.

Then it was time for the deadlift – my arch nemesis. I opened with a 90kg lift and went for the 100kg lift in my second attempt – and got it! I was more relieved then excited. I went back to attempt 102.5kg for the 3rd lift, but I had used all my mental will power for the 100kg, I just didn’t have it in me.

So with the 100kg deadlift, I was able to beat my previous total, which is now sitting at 247.5kg. I’m planning to do another competition at the end of June, where I aim to increase this total even more.

Below are videos of my best lifts for the day.