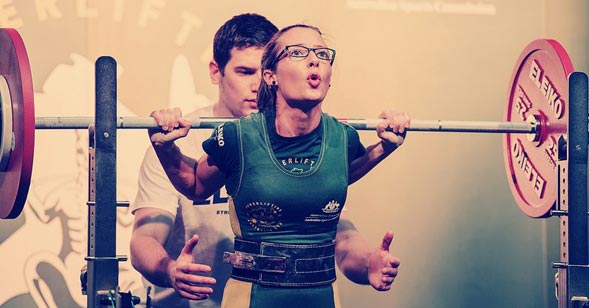 Just over a month ago, I competed in my first international powerlifting competition, that being, the Oceania Powerlifting and Bench Press Championship, which was held in Sydney. This competition brought together the best lifters in the region, with competitors from countries such as Australia, New Zealand, Fiji, Samoa and Nauru.

Leading up to the competition I was feeling really good about my lifting. My deadlift had been making progress all year ever since I got over my 100kg hurdle back at Nationals in March, and I felt my bench was coming together (even though I was yet to get a new PB lift), however somewhere along the line I lost my confidence in my squats – for no good reason, other than the fact it seems that I can’t be confident in all three lifts at the same time!

Squats had always been the lift I felt most confident in, but with my new found hesitation, I didn’t perform as well as I had hoped on the day. It took me all three attempts just to get my opening squat of 90kg (even though I have opened with 90kg for the previous two competitions that I competed in last year). However, even with my squat not being what I had hoped, I still walked away with a bronze medal for my lift.

With the squat out of the way, I was now just happy to be in the competition. For my bench press I equalled my personal best of 52.5kg, but I wasn’t able to pull of 55kg. However I was very happy with how it went, as I felt like 55kg is not far off (here’s hoping it comes in 2013!).

My goal of the Championship was to achieve an Elite II status (an international qualifying total) of 255kg. This meant I had to pull a 112.5kg deadlift, which would be a personal best for me. I opened with 100kg, then 107.5kg and got my third attempt of 112.5kg. A new PB!!!

I thoroughly enjoyed my first international competition, and had a chance to meet some great lifters. I also learnt a lot about my own lifting, which I will use to help me with my next competition – that being Nationals in March.

Below you can watch videos of my best lifts for the day.