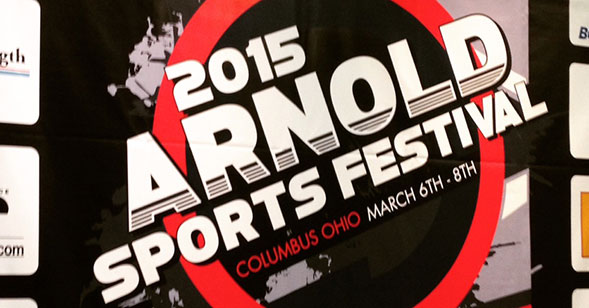 It’s been two and half weeks since I competed at the 2015 Arnold Sports Festival in Columbus, Ohio, USA. It was a turbulent trip away with some great highs and some personal lows. But all in all, it was a wonderful experience.

In the weeks leading up to flying over, I questioned whether I would compete, knowing that my father-in-law did not have long to live. But after talking with my husband I decided to go and to make the most of the trip. My father-in-law did pass away while I was overseas, which I found very difficult being so far away, but I did make it home for the funeral and was able to get back to support my husband and his family.

This was my first overseas competition and what a great experience it was! The atmosphere was amazing, with over 175,000 people attending the Festival. I met some amazing lifters, reconnected with some powerlifting friends and made some new ones.

I competed on Friday 6th March.  I weighed in at 51.1kg. I got my first two squats of 110kg and 115kg, but missed 120kg. Even though 120kg is my best competition squat, I just didn’t have it on the day. I only get my opening bench attempt of 60kg. From there I knew I had to get all three deadlifts to walk away from the competition to feel like I had done a good job. For me anything under 6/9 lifts is not a good competition. My final attempt for the deadlift was going to be 130kg. I had never, even in training, lifted this weight. I had attempted it twice before in the gym, but had failed to get it off the ground each time. But I knew I had it in me. I finished with 3/3 deadlifts with 117.5kg, 125kg and 130kg, to finish with a personal best lift and a personal best total of 305kg.

You can watch my 130kg deadlift here:

I was really pleased with how the competiton ended. Not just because i got a PB, but because I didn’t let missing my last squat and my last two bench presses get to my head. I was able to move on and stay focused on what I had to do. This was a big mental win for me! It was also my first competition since rehabbing from a hamstring tear late last year.

It is now just over two weeks until the Australian Championships and I was straight back in to training after competing. Having a competition so soon after The Arnold, I am looking just to get a similar result, maybe even a tiny bit more! But i’ll wait and see what I can do on the day!