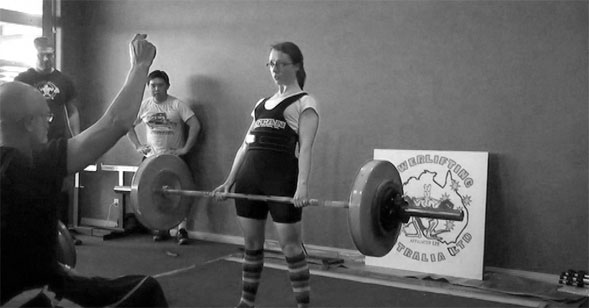 I competed in my third powerlifting competition last weekend, the Lake Macquarie Open, in Toronto NSW. Being a powerlifting novice, my aim for the competition was to simply beat the 237.5kg total I achieved in the Hawks Novice Comp in June, and to gain some more competition experience.

I felt quite nervous in the weeks leading up to the competition, as I had stupidly (and knowingly) overtrained prior to an important squat session, which led to a mediocre squat result, and damaged my confidence. However, I made sure I spent the week before the competition doing very little training, to freshen up in time for the competition.

By the time competition day came around I felt relaxed and prepared. I knew I had put in all that I could.

I weighed in at 53kgs, which put me in the 56kg weight class. Not that the weight class was important to me at this competition, as I am not yet lifting enough to meet a qualifying total to compete at a national level.

With the squats out of the way, I was feeling confident about my bench press. I wanted to get 52.5kg, which  I knew was achievable, as I had managed 55kg in training. But my first attempt of 47.5kg was disqualified as I benched too low (the bar is not allowed to touch lower than the bottom of the sternum). I was disappointed, but I had two more attempts to get it right. I pushed the weight up to 52.5kg for the second attempt, but again benched too low. Now I was nervous. I had one more attempt to get it right. A couple of experienced lifters gave me some good advice in the warm-up area before my final attempt. I went out to the platform, focusing on their advice and what I needed to do to ensure I didn’t bench too low again. However with all of my focus, I started pressing before the referee gave the call to start, and for the third and final time, my lift was disqualified. I had bombed out of the competition. I was very disappointed to say the least. However  I took the result as a learning experience, and will use  it to focus on getting my technique right for the next competition.

Even though I had bombed out of the competition, I was still able to compete in the deadlifts. I kept my first attempt much lower than I new I could do at 85kg,  I then bumped up the weight to 100kg for the second attempt, and got it easy. This was a new competition PB. However, I had one more attempt left, and pushed the weight up to 107.5kg, which I also got without too much trouble.

I was obviously disappointed with bombing out on my bench press. But on the plus side I was very happy with my new PBs for the squat and deadlift. You can watch the videos of these lifts below.

My focus is now on the next competition in early December where I am hoping to qualify for the national competition in the 52kg weight class. I will need a total of 275kg. For the next few months I will continue to focus on building my strength, my strength-speed, and work on my bench technique.

I’ll keep you all informed on how I go.